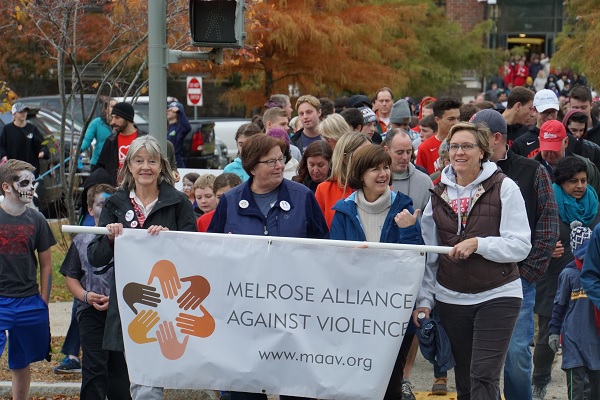 Once again, the community turned out to support MAAV at our 23rd Annual Walk & Candlelight Vigil. More than 500 community members attended this year’s event, which raised more than $50,000 (a new record!) for MAAV’s programs and services!

The event began with a Candlelight Vigil to honor the eleven victims of domestic violence homicide in our state since last year. Our 8th Annual Advocacy in Action Award was presented to Mike Bloom, who was unable to attend. MAAV Board Member Karen Willis, a survivor of domestic violence, accepted on his behalf.

The theme of this year’s Walk was “Words Have Power,” which was chosen to convey that words can be just as powerful – and just as hurtful – as fists. We are more likely to see verbal abusive in a relationship, rather than physical abuse. And while people often minimize verbal abuse, the truth is that words can be more painful, and leave longer-lasting scars than physical abuse. It’s also important to remember that verbal abuse, and the emotional abuse it brings with it, often is the precursor to physical violence. Community members were able to participate in our #WordsHavePower art project at the event.

Thank you to everyone who walked with us, formed a team or served as an event sponsor! We could not do what we do without your support!